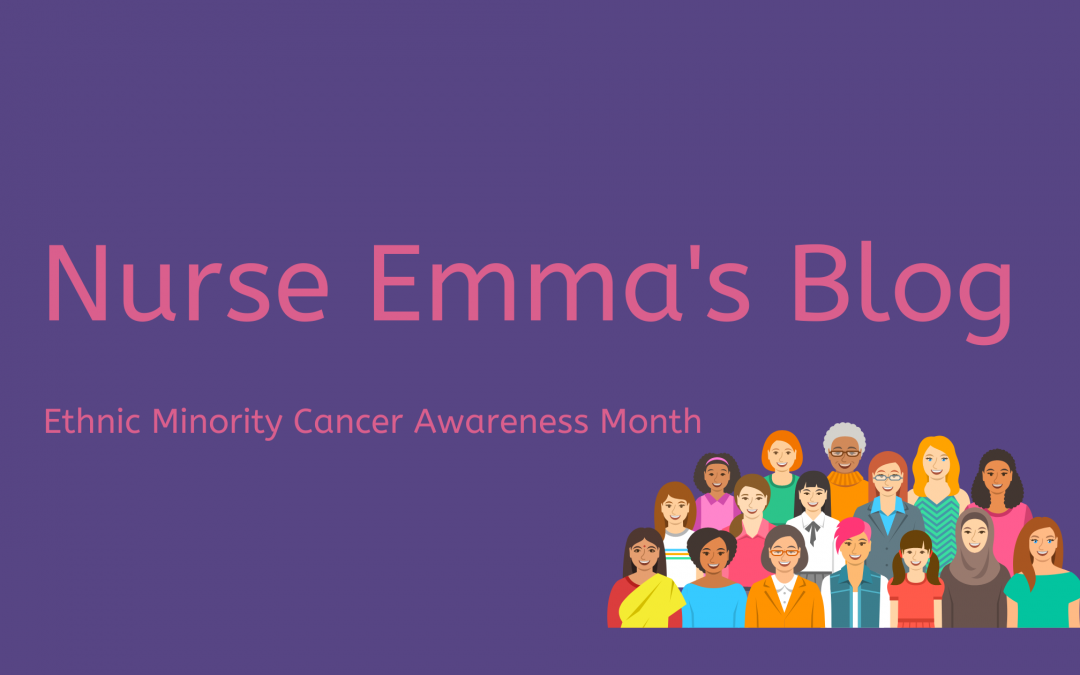 We recently posted a blog discussing the differences in breast cancer between Black and white women. Since July is Ethnic Minority Cancer Awareness Month, we thought it would be a good idea to talk about breast cancer in other cultures too.

While breast cancer incidence in the UK is lower in women from Chinese, Black, South Asian and mixed heritage, the stage at which it is detected is often much later than it is in white women.

Reasons for this are varied. As we previously wrote, Black women have been found to be disproportionately affected by triple negative breast cancer and inflammatory breast cancer which are both more aggressive. We also know that women from Ashkenazi Jewish ancestry can have an increased risk of breast cancer. So, we know biology and genetics play a role but other factors such as a lack of discussion about breast cancer, lack of awareness of breast screening and treatment and low attendance rates for screening can affect the age and stage of a patient’s diagnosis, what kind of treatment they receive and their survival rate.

We recently spoke at Welcome to the UK, a support group for people who have moved to Britain and may have language barriers, may not understand the NHS system or other aspects of living here. Our main message to the women in attendance – who were from various countries in Europe and Asia – was that breast awareness is the same for everyone regardless of age, gender or colour. We showed the women there how to feel and look at their breasts each month so that they are familiar with their bodies and encouraged them to talk to family and friends about breast health. The more at ease people are discussing it, the more likely it will be that checking for changes becomes a routine part of life.

Any breast changes including lumps, dimpling, puckering, nipple changes, discharge, bleeding, change in size of position of the breast must be checked by a GP without delay. It is also vital to attend screening when invited.

Mammograms are offered to all women in England aged 50-70. Women over 70 won’t receive automatic invitations but can still arrange them by contacting their local breast screening unit.

The key is to be breast aware and know what symptoms to check for. This is the same for every one of us regardless of our ethnic background. If you would like any information on how to self-check and learn the signs, please contact us at Lady McAdden.

We use cookies on our website to give you the most relevant experience by remembering your preferences and repeat visits. By clicking “Accept”, you consent to the use of ALL the cookies.
Cookie settingsACCEPT
Manage consent

This website uses cookies to improve your experience while you navigate through the website. Out of these, the cookies that are categorized as necessary are stored on your browser as they are essential for the working of basic functionalities of the website. We also use third-party cookies that help us analyze and understand how you use this website. These cookies will be stored in your browser only with your consent. You also have the option to opt-out of these cookies. But opting out of some of these cookies may affect your browsing experience.
Necessary Always Enabled
Necessary cookies are absolutely essential for the website to function properly. This category only includes cookies that ensures basic functionalities and security features of the website. These cookies do not store any personal information.
Non-necessary
Any cookies that may not be particularly necessary for the website to function and is used specifically to collect user personal data via analytics, ads, other embedded contents are termed as non-necessary cookies. It is mandatory to procure user consent prior to running these cookies on your website.
SAVE & ACCEPT